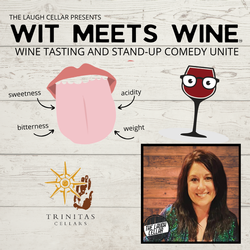 Wine Society members receive 20% off the ticket price. Log in to receive the discount.

Join us and the The Laugh Cellar for a unique wine tasting experience. It’s not about making fun of the liquid in the glass. It’s about using humor to present a truly memorable wine tasting.

Wit Meets Wine serves up a one-of-a-kind occasion to gain enjoyment, practical knowledge and genuine appreciation of wine through laughter.
Plus get other "notes of hilarity” from the comedian's palate. Guests are invited to ask questions about the wine.

For the final ‘punch down,’ the tasting will properly end with a stand-up comedy set!

Courtney Cronin Dold is a Los Angeles-based stand-up comedian, comedy writer, television and digital media producer, development consultant and owner of Find Your Funny Comedy Consulting. She was nominated for a Daytime Emmy for The Wayne Brady Show where she worked as the comedy producer and writer for Wayne.  She provides comedy material and roast jokes for comedians, influencers, rockstars, actors, athletes, television hosts and reality stars. She has provided comedy material for hundreds of live events, as well as over 40 television series and pilots. Collectively her private clients have over 100M views, likes, and followers on YouTube, TikTok and Instagram; several of her clients are Emmy Award Winning television personalities. Courtney performs comedy in Los Angeles and beyond.