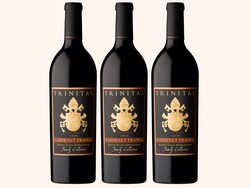 Partake of The Wine Made for Pope Francis

The 2014 CABERNET FRANCis begins with aromas of cassis, star of anise, and ground nutmeg, then moves into notes of mocha, ground cacao  powder, and beautiful ripe cherries. The palate starts with rich flavors of cherries jubilee, malted chocolate and barrel notes of crème brûlée and barrel spices. The Cabernet Franc is absolutely mouth coating with powdery smooth tannins that finish on the palate with just enough grip.

The Story Behind the Bottle: At their annual audience with Pope Francis in 2012, Tim and Steph Busch, owners of Trinitas Cellars in Napa, presented him with more bottles of their “Cabernet FRANCis” wine made from Knights Valley grapes. It was the second time the Pope was given the wine named for him.

“Your wine is augmenting the Pope’s vices,” Pope Francis told the Busch’s through an interpreter.

The wine, named for the Pope, is 100 percent Cabernet Franc grapes from John Pelkan’s vineyards in Knights Valley, a half dozen miles north of Calistoga in Sonoma County. “I’m honored,” Pelkan said of the Pope’s fondness for the wine made from his grapes.

When the Busch’s learned in 2013 that Argentinian Cardinal Jorge Mario Bergoglio was named Pope, they called their son, Trinitas CEO Garrett Busch, and said they wanted a new wine made for the Pope.

“It would have been logical to make a Malbec,” Pelkan said, since that is an Argentinian grape. But you can’t just pull a ready-made wine out of a hat.

A Cabernet Franc that was in barrel seemed a better choice, and was named Cabernet FRANCis. They hand-bottled and labeled a half-dozen or so bottles, with most of them destined to be given as gifts to cardinals during Tim and Steph Busch’s visit in 2014. They gave away all but one bottle, which they saved for the Pope. When the Pope saw the bottle, he pointed to it and said “Me vino, me vino.”

Later in the day, the Busch’s got a call from someone in the Pope’s office to tell them he shared the bottle at lunch and would like more. Tim Busch got on the phone and contacted all the cardinals they had given bottles to and retrieved those that had not already been drunk.